Ask SGO: How can we foster inclusion across teams? 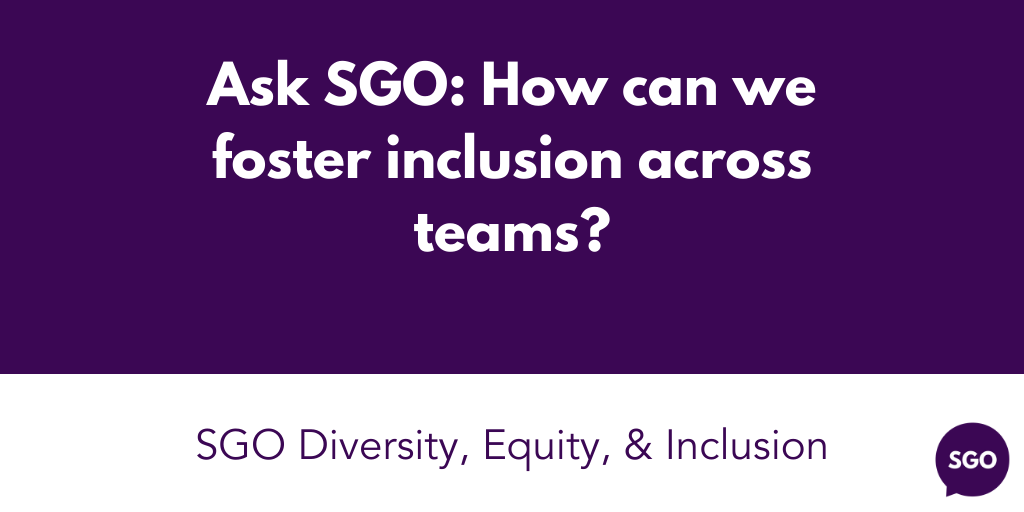 How can organizations build cross-functional teams that are truly inclusive? These teams are better positioned to solve problems efficiently and support their employees, but there are some specifics you need to know. Rachel Sadler, DEI Facilitator for She+ Geeks Out, gives tips for how to foster inclusion across teams.

Something came up yesterday when we were talking about inclusivity and the derailment of inclusivity of people that have different abilities, different ethnicities, ethnic backgrounds, or religious affiliation, and kind of conflating that with your job inclusion.

So, for example, you work in HR and I work in marketing and we’re having a meeting about marketing. Well, HR is not really going to have anything to say about that because you deal with the paperwork and, you know, whether or not people are breaking the rules. So, this isn’t a conversation about whether or not that person feels included in the conversation, but rather, are we creating a space where all of the voices of the people that are bringing themselves to the table- all the marginalized groups that we employ- do they feel like their opinions and their thoughts are valued? Do they feel like they can come to the table with their questions or concerns and be validated in that, and not be pushed to the side or ignored based on their membership in one of those groups.

So companies can foster that type of environment where people feel like they can bring those ideas to the table by relationship building, by making sure that you are building relationships across teams from upper management, down to even the people that clean the building, right?

Making sure that you’re building a positive relationship with everybody in the building that you come into contact with.

It’s calling people in who may be saying things that are out of order and doing so in a way you don’t have to stop the whole meeting and say, you know, Ted that’s an inappropriate thing to say, right? You can call Ted in later and have a conversation about why that maybe was hurtful to someone on his team because perhaps nobody’s had that conversation with him before.

And then you’re amplifying the voices of everybody at the table. So if you have a woman, for example, that’s speaking and someone cuts her off, you’re saying. “Hey, let’s hear what Jane has to say and then we’ll allow you to talk after that.” It’s asking questions to people that don’t usually speak up because they may be introverts or they may have been passed over before so  they don’t feel like their voice matters. So it’s reaffirming them by specifically seeking out the voices of all the people in your organization.