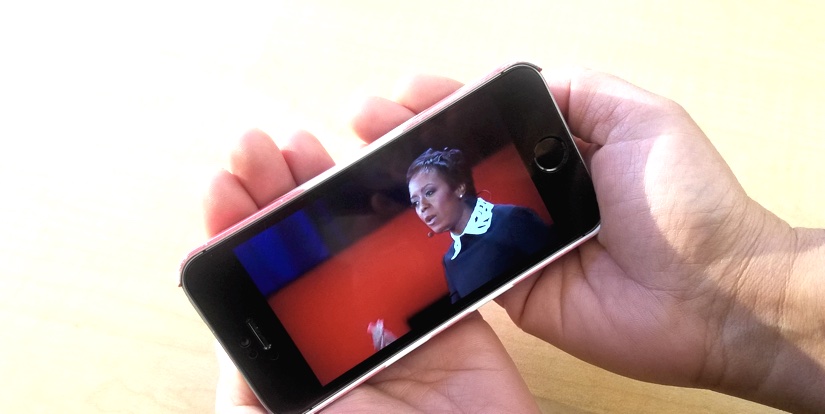 5 Videos You Must Watch to Learn About Diversity, Equity, and Inclusion

Ask SGO: How can we create welcoming spaces to learn? 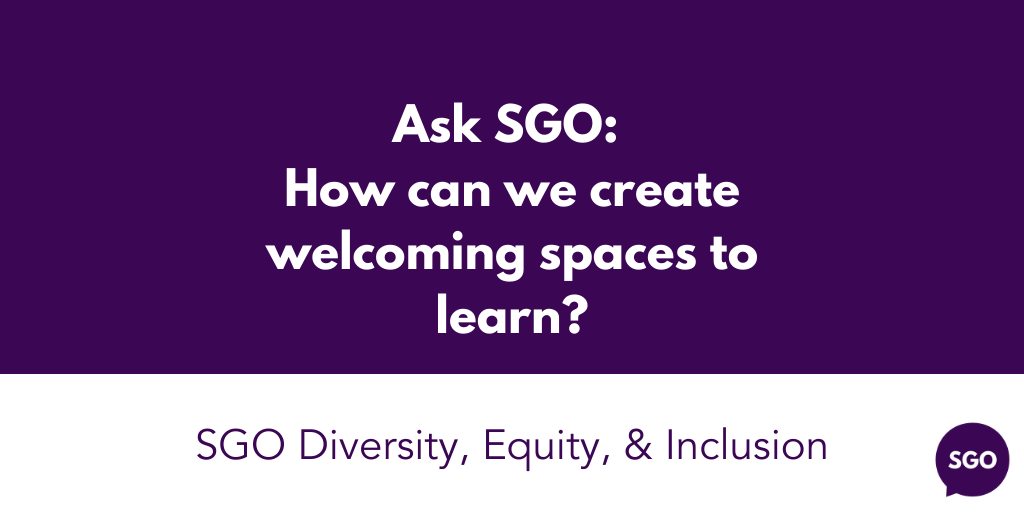 Felicia:
One thing I think about a lot, especially in these days where most of us are still working virtually, is how can we create welcoming spaces for our workshops, and trainings, and programming. It is a little bit different than it might have looked like or felt like pre-pandemic, when we were gathering mostly in-person. But I do have a couple of quick tips I’d like to share. Just things that I like to implement and use in my own practice, for thinking about how to create an open, safe, welcoming space for people.

So, first thing is that, as I’m sure you all have had some familiarity with at this point, being online and having long silences can be really awkward and it’s a little bit different than it would have felt if we were together physically. And so sometimes it can’t be helped because for example, when we’re still waiting for people to sign into a zoom call, we have to just wait and I don’t like to jump into content right away, just because I do want to make sure everyone is there and present and ready. So personally, I like to have a little bit of background music. I use my Spotify playlist and the one that I’m currently really liking is a meditation playlist. It’s basically just a lot of calming, soothing, soft music that I will put softly behind myself when I’m talking and on audio when I’m waiting for people to join in. And this is something I also will have playing when, for example, if we had people in breakout rooms and we’re having them all joined back in together, sometimes people will hop back into the main room right away, and then we’re still waiting for about a minute or so for other people to wrap up their conversations. And so I’ll have the music playing there as well.

I tried my best to be, I guess, what you could call a DEI Practitioner Audio DJ, where I don’t like to just abruptly end the music because that can feel a little jarring, so I try to ease it down and then press pause so it’s a nice little slide down away from having the music playing really loudly. And you know, I actually had a training group request a playlist recently. And so for, I forget what it was, but some activity we were talking about the topic of Taylor Swift. And so I did manage to DJ on the fly and I had a little bit of Taylor Swift music playing when they came back from break. That’s just one tip. I’d love to hear if you have other tips, but it’s something that you know, we are certainly thinking a lot about because we do want to make sure that we’re creating space and it’s something that’s very top of mind, even virtually.

Fatima:
I love that. I love that. I’m gonna say, I love that one more time, just in case you didn’t catch that: I love that. In terms of other tips beyond music, which is so great, especially during break time, like before starting it’s awesome, but then also when you’re like, Hey, take a moment to reflect, while you’re facilitating. Sometimes people like that waiting room music, which is sometimes nice, even if it’s just instrumental. So Felicia, that’s awesome.

Some other things I think about, and most people start, you know, trainings or other types of meetings this way, are guidelines. And so, especially when you’re having conversations related to diversity, equity and inclusion, and we’re going to be asking people to share both their personal and professional experiences, we don’t want to just dive right into the content. So what does it look like for us to share that virtual space together. As facilitators and practitioners, we often come with a list which we term “suggested community guidelines.” And the reason we start off saying “suggested” is because we don’t know what works for everyone and how everyone wants to talk about the topics that we’ll be going over. So a few things we put on our list is be present and engage as much as we can, because we’re doing this virtually. Other things take space, make space. So we really appreciate engagement, but we also know that some of us are long-winded like me sometimes, and it’s like, we love the sharing and anyone else want to share? I also think it’s helpful for those of us who might process differently or need some more time to think about our experiences or share our thoughts. That might be an opportunity for us to take a step back and think, and then when we’re ready, we can share more. So that’s another way that I like creating a welcoming space together as we do trainings. Anything on your end Jacquis?

Jacquis:
I echo what both of y’all said. I’m a sucker for music during and before a playlist. One of my steadfast loves is Luther Vandross, Never Too Much. I think it is a generational bop that everyone can really enjoy.

I also echo guidelines. I often think how can we be in community with one another, and guidelines or suggestions or agreements, however they’re articulated, hopefully allow us to create that space collectively, which I’m all for.

This is undoubtedly the higher ed person in me, or the forever orientation leader, I would suggest a tip is always some kind of, whether we articulate it as an icebreaker or a community check-in, at the beginning of a presentation or a training or conversation. I love it. I love when they are sincere and heartfelt and we’re asking how we are doing- truly doing, I also love it when it is a zombie apocalypse five minute check-in. I really love icebreakers. I think they can be as silly and as authentic and genuine as the facilitators make them. And I think it’s a really great way to maybe practice some vulnerability, but also shake out some nerves that folks may be having, as Fatima said, when we’re talking about such heavy lifts around diversity equity and inclusion work.