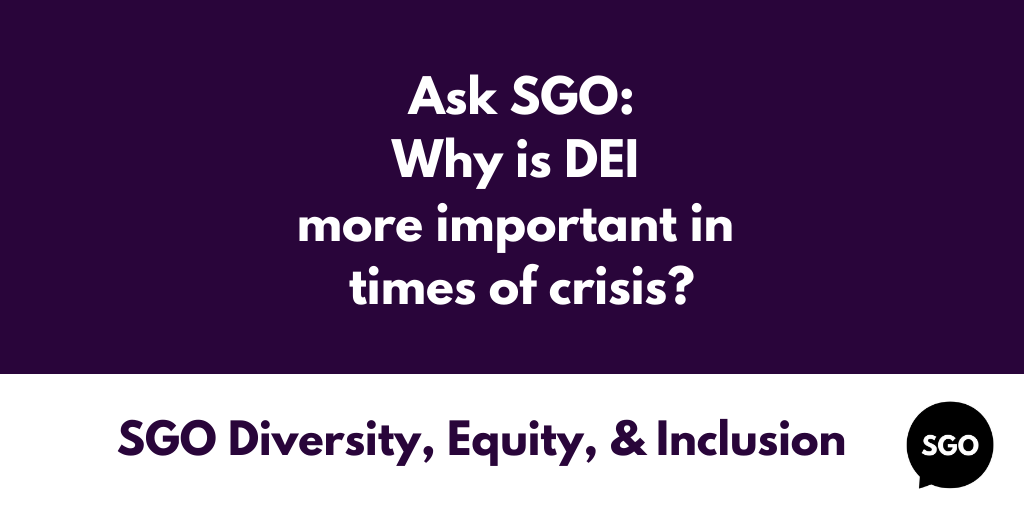 Why is diversity, equity, and inclusion more important in times of crisis?

SGO has provided programming in the diversity, equity, and inclusion (‘DEI’) space since 2017. In 2018, we conducted our first ever survey to assess how and what the Boston-area tech community thought about diversity and inclusion. Specifically, we wanted to hear from tech companies about what they were doing to respond to the increase in interest in diversity and inclusion, and from individuals working at these aforementioned tech companies to gauge how their experiences were at these organizations.

A lot has happened since the 2018 survey was originally conducted, and we released an updated survey in 2019. We opened our survey to include responses from people in all fields and industries. The focus of the 2019 survey was to assess how DEI was or wasn’t part of the respondents’ experiences in a workplace context. We also wanted to find out if our thoughts on trends within the workplace were matching up with what people were actually experiencing. This survey was conducted online via SurveyMonkey from November 2019 through February 2020, with a total of 420 participants from not just Boston, but also cities across the U.S. from Seattle to Orlando, and beyond– we even received a few international responses from Canada, Germany, France, and New Zealand. One silver lining we’ve been reflecting on lately is that for many years we’ve been debating the best way to scale SGO beyond Boston, and this survey was an early indicator that we are truly global!

The survey questions focused on a few high-level areas: demographic data of respondents; thoughts and feelings regarding how various industries were addressing diversity, equity, and inclusion; company culture; inclusive corporate policies; post-2016 changes or shifts in the workplace. The biggest takeaways from the survey are that issues and concerns around DEI are still prevalent, are shared, and are not unique to one geographical area or even one industry. While there were a lot of positive areas that respondents highlighted, we found that the vast majority (89%) agreed or strongly agreed with the statement that diversity, equity, and inclusion are issues of concern in their industry. Interestingly, 78% of respondents agreed or strongly agreed that they felt like they belonged in their industry, and 80% agreed or strongly agreed that they felt like they belonged at their company. These were much higher data points related to inclusion than we had perhaps been anticipating, but underline the reality that while there is actually a lot of good work being done in these areas, we still have ample opportunities for improvement.

Additional highlights of the survey:

There are many productive diversity, equity, and inclusion initiatives taking place at work. However, the journey is still in its infancy for many, and a large number of organizations have a great deal of work left to do. If your organization is in need of any guidance or assistance, don’t hesitate to reach out to the team here at SGO.