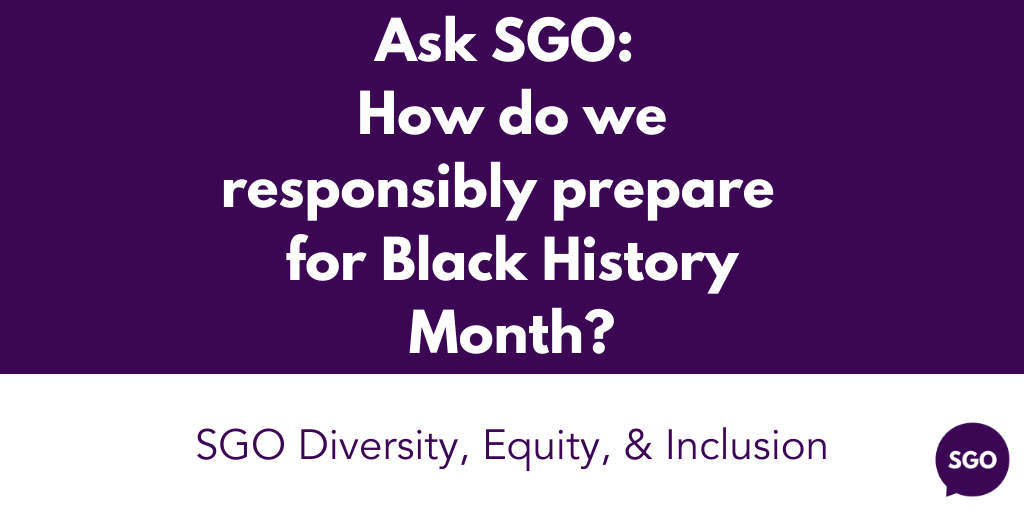 Ask SGO: How do we prepare for Black History Month?

A few years ago, we compiled a list of recent TV shows and movies that pass the Bechdel test and thought it was time to revisit this with a focus on TV – we live in a golden age of television!

As a reminder, the Bechdel test is named after Alison Bechdel who introduced the concept as part of her Dykes to Watch Out For comic series in 1985, but she attributes it to her friend Liz Wallace, who attributed it to Virginia Woolf. Here’s how the test works – a piece of fiction has to satisfy three requirements:

That’s it. And it’s been surprisingly challenging for movies and TV shows to pass this basic test. Why? Because representation matters, and many of the people writing, directing, and producing are still majority men.

Here’s an excerpt on research conducted on film and gender in 2021:

While there’s been some improvement, much work is left to do. Happily there have been some absolutely stellar standouts as of late which not only pass the Bechdel test, but also move beyond this low bar into portraying powerful and moving performances with real substance and impactful storytelling.

Ted Lasso
While it may be a man’s name in the title, this might be one of our favorite TV shows that passes the Bechdel test with flying colors. Not only are the relationships between the female characters strong and loving (see: Rebecca and Keeley, Nora, Nora’s mom Sassy, and the powerful moments between Rebecca and her mother), one might argue that Ted’s lack of patriarchal bullshit is what makes him a part of the feminist society ideal that many of us wish for. At a time when toxic masculinity is still very much alive and well, this entire show is a breath of fresh air.

Insecure
The real love between Issa and Molly gives us all the feels… like all of them. Sadness, joy, frustration, bittersweetness. What Insecure does better than most shows is showcasing real vulnerability and raw honesty, and therein lies its beauty. Beyond the central relationship between those two women, any time there’s a moment between women features the show at its best. And you know when else Insecure passes the Bechdel test? When Issa speaks to herself in the mirror. So real. This show will be missed.

Dead To Me
Jen and Judy are complicated. Easily passing the Bechdel test, Dead to Me brings together two women with completely different ways of being in the world together to deal with some wild bananas weird stuff. It gets uncomfortable at times, but their stellar performances keep us glued.

Grace and Frankie
How often do we get to see older women rise up against adversity with a whole lot of laughter and a whole lot of love? This special show gives us hope, makes us feel good, and reminds us that aging doesn’t have to be awful (despite all those anti-aging ads). In fact it can be pretty spectacular, especially when you’re hanging out with other women!

The Flight Attendant
We aren’t Big Bang Theory people, so we didn’t have much of a frame of reference for Kaley Cuoco, but wow does she and her castmates do a spectacular job. Her character, Cassie, is a fun-loving flight attendant who gets into a huge problem. Her best friend and coworkers are there for her, even at her lowest. Her struggle with alcohol comes to a head and it was powerful to see how her friends supported her without enabling her.

The Good Fight
We were fans of The Good Wife, and when The Good Fight aired, we were excited to see some of our favorite characters back and connecting with each other in fascinating and exciting ways. Whether related to law, business, or politics, Diane, Lucca, Marissa, and Liz in particular had stunning moments of grace, confidence, and jaw dropping cool that we simply loved watching. We’re ready for Season 6!

The Wheel of Time
In a rare turn of events, we have one of two fantasy series on the list! Fantasies are notoriously male-dominated (Game of Thrones, Lord of the Rings, we see you!). The series based on Robert Jordan’s epic series begins with the premise of a world ruled by women who have to deal with a lot of very bad men. While the show is problematic in a few important ways, it does move the needle, but frankly it’s just nice to watch fantasy with less cleavage for a change.

The Witcher
And our second fantasy series is The Witcher, which, despite a lot of male energy (wayy more um, cleavage, in this one), does indeed pass the Bechdel test a few times – Yennefer and Tissaia’s complicated relationship, as well as Ciri and Eithné’s short time together, and honestly probably more but we’re still working our way through this story (hey, we still have pandemic time to watch!).

The Morning Show
Oof– this last season was a toughie (hello, news media + New York + #MeToo + Covid = messy!), and there weren’t as many scenes that passed the Bechdel test in this season as there were in its first, but it’s absolutely still worth mentioning. Alex and Bradley, newly brought together co-anchors for The Morning Show, have a complicated relationship. They each have their own baggage which we learn about over time (and there’s definitely more to unpack). It’s exciting to see them roll up with their emotional Away bags and yet be really nervous to unpack them in front of each other. This may feel a bit more like a soap opera than a drama, but it absolutely passes the test!

Killing Eve
Villanelle and Eve are the two stars of this thriller series and have a relationship like we’ve never seen before. Love and hate, fear and obsession, joy and anger, are all represented in their dance. While they both grapple with these feelings, we get to see how gorgeously complicated the human experience is through the lens of this intense and beautifully acted series. Thank goodness there’s one more season to go.

Please know that these are only a portion of the new television series passing the test. Others such as Bridgerton, The Nevers, and Yellowjackets make the list, too. Next up, consideration of film beyond this basic test. Stay tuned by signing up for our newsletter! Have we missed anything? Let us know!