What Tech Company do You Want to Work For? Start With Those that Highlight Diversity and Inclusion 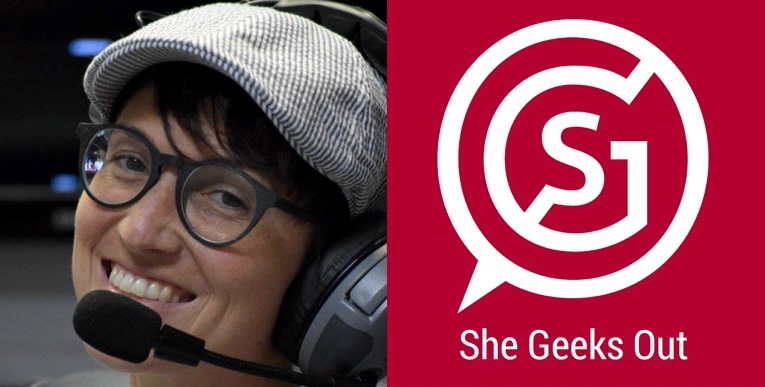 Podcast Episode 39: The importance of community and getting hyper-local with Erica Jones

Two of our favorite SGO people, Sam Hammar and Iris Amelia Febres, met at a She+ Geeks Out event and are now working together at the Treasury Department of the Commonwealth of Massachusetts. LOVE! We asked them to share a little bit about them, how they met and how it’s going.

Tell us a little bit about yourself– what’s your background and your story?
SAM: I have been in public service most of my career. I’ve been a Boston Public High School teacher, Economic Development staff in City Hall, innovation and technology at the Commonwealth, and now a Director of Digital Engagement for the Treasury, including the Office of Economic Empowerment. And I’m a mom of 5-year-old twin girls, so I don’t have time to waste.

IRIS: I was an English major in undergrad, and like most English majors, was feeling stuck between teaching and doing a PhD. I was involved on the school paper and realized I really enjoyed creating and working with a physical product. After a few conversations with professors, I found out that publishing was a thing and that there were a few graduate programs in the U.S. that focused on it. So I moved to Boston from Miami for my master’s at Emerson College.

When I finished that in 2012, I jumped right into trade and technical publishing. My area of expertise centers on ebook development. I learned how to make ebooks at Emerson and became very interested in the technical aspects of that work–specifications, platform support, coding. That soon evolved into examining problems that surrounded digitizing content. I realized that was a challenge many industries have, not just publishing. I think ultimately, that’s why I found the job Sam needed to hire for really cool.

Wow, I really am an English major. I could have cut this down to like, four lines.

IRIS: I geek out about … hmm … well, I love books. I have tons of books I haven’t read because I love hoarding them. I love publishing, despite its issues. On the hobby line, I really enjoy collecting enamel pins(!) and playing board games and card games.

Iris, how was the process for looking for a job for you?
It was incredibly stressful; I won’t sugarcoat it. I had a layoff last year and after a three-month unemployment stint, left another job due to its toxic environment. I was determined to be gainfully employed again, but my confidence was shot to the floor. I managed to get a short-term contract gig, which I eventually left to pursue the opportunity with the Treasury. It was out of my comfort zone enough to be challenging, but I observed many overlaps to my experiences in publishing that made me feel like, “Oh, OK, it’s the same thing here.” That made me feel confident and capable.

I will tell you, my job searching was true test of my character. 2016, for many reasons, was a terrible year. But 2017 is looking pretty not bad!

Sam, tell us about the Commonwealth and what makes it special!
This place is amazing. Everyday, I can see (or hear) about how change is made that directly impact the people in Massachusetts. It’s exciting to be near or a few degrees of separation from elected decision-makers, which provides a heightened sense of pride. Seeing the Treasurer or Attorney General in the same elevator or cafeteria makes walking around this place seem like the West Wing. (I’m a Sam, btw.)

Sam, how long were you looking to hire for Iris’s position?
When I join the team, we already had a web designer on staff. When he moved on, we didn’t rehire for quite some time because we were taking a deeper look into what we actually needed in an additional person.

After a few short months, another key staffer was leaving one of the projects and I was going to be ALL ALONE! We knew we needed to bring somebody on, but who would be able to do it all- content, editing, design, code- and willing to work in government!? That person is a total unicorn.

Iris and I had stayed in touch since meeting at a SGO event a few years ago, and I would DM her jobs in the startup and gov communities periodically. I initially reached out to Iris about an opportunity here at the Treasury, knowing it would be too junior for her. I sent it anyway since this place is amazing and these positions don’t open very often. After sending her the post, I thought, “Wait, *I* need somebody! I need her- *she* is a unicorn!”

How did you two connect specifically through She+ Geeks Out?
IRIS: We met at an SGO event back in April 2016, which discussed non-technical women in technology. Sam was a panelist and I really loved and resonated with her energy and enthusiasm. As soon as the panel ended, I said to myself, “I need to talk to her and get her card.” I immediately introduced myself and let her know I was “a digital content person.” I think Sam’s eyes widened and she was thrilled to have me in her circle. My background is in publishing, so my expertise is a really interesting mix between books and tech, specifically ebooks. The challenges publishers face regarding digitizing content permeates in many industries, especially government, which I happily discovered with Sam.

SAM: After the SGO event about women in technology, I hung around after and met a phenomenal woman who impressed me with her smarts and humor. We DM’ed on Twitter every once in a while to keep the conversation from that event going.

How is it going so far?
IRIS: FANTASTIC. This is honestly the best job I’ve ever had. The people I get to work with are outstanding. (Especially Sam.) I do some cool stuff within the Office of Economic Empowerment–financial literacy, empowering women and underserved populations–so it’s really feel-good work. I feel like the technical stuff I do ultimately makes a difference. I get to exercise my content architecture chops with the work we’re doing on the new mass.gov site, coming later this year. I’ve learned quite a bit–not just about government, but about what I want out of a workplace and an office. I definitely gained some professional development and growth.

SAM: Beyond expectations. Iris not only exceeds our project needs, but also she is one of the family. The whole team is in love with her, but none more than me. Sometimes you just know you will get along and work well with someone after meeting them for a minute and this is one of those moments. Regardless of how long our work life is together, we will always be friends, snap buddies, and have amazing memories of the hard, valuable work we did together.

Do you have a story you want to share? Tell us! We’d love to feature you!