2022: The year of setting boundaries at work

Ask SGO: How do we hold multiple truths at the same time? 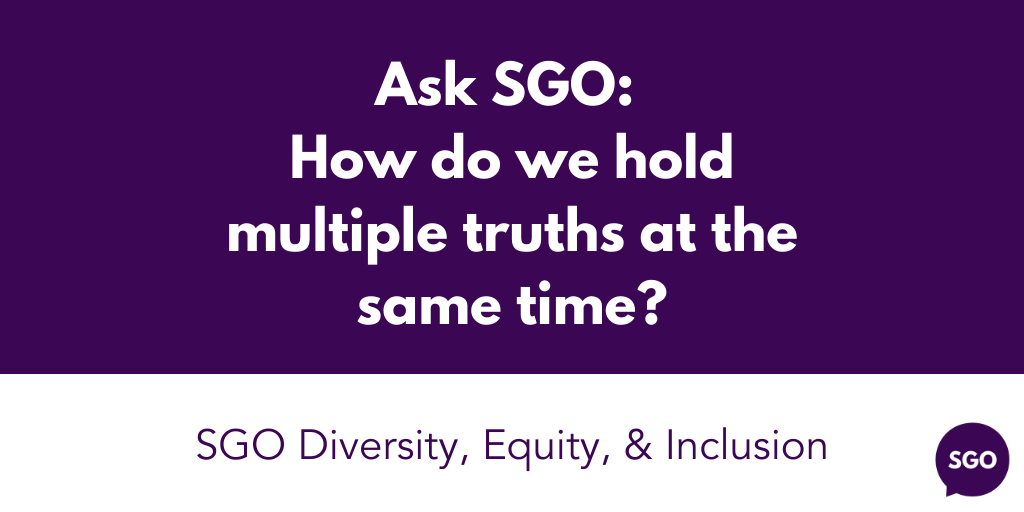 So having multiple truths makes me think about quantum mechanics. And, just a caveat: I’m not a scientist and I don’t know science things. But quantum mechanics essentially is the study of the smallest parts of our universe, such as atoms, protons, and neutrons. When we start to hone in on these tiny parts of our universe, they present us with a ton of contradictions.

For example, an atom is mostly made up of empty space, but all things are made up of atoms. So my car is made up of empty atoms, but I can still get in it, drive to Starbucks, and operate it as this object of permanence.

So, what does that have to do with DEI?

Well, two things can be contradictory and true at the same time. The truth may be that your organization has a number of BIPOC employees, and potentially some in upper management, but can still need work around inclusivity and equitable practices. You can personally believe that you’re not outwardly racist towards people of color, and still hold ideas about them that are culturally based in racism. Hello, implicit bias.

The goal is to be able to experience this discomfort, or what we call cognitive dissonance, and sit with it, instead of shrugging it off to cleave to whatever idea makes you feel better. It means acknowledging that opposing ideas can be true at the same time, and we can move forward despite our discomfort, if we lean into that and don’t allow that to stop us in our tracks.