A Letter to the SGO Community

Moms in the Workforce: A Way Forward

Ask SGO: Help! How do I deal with a problematic favorite? 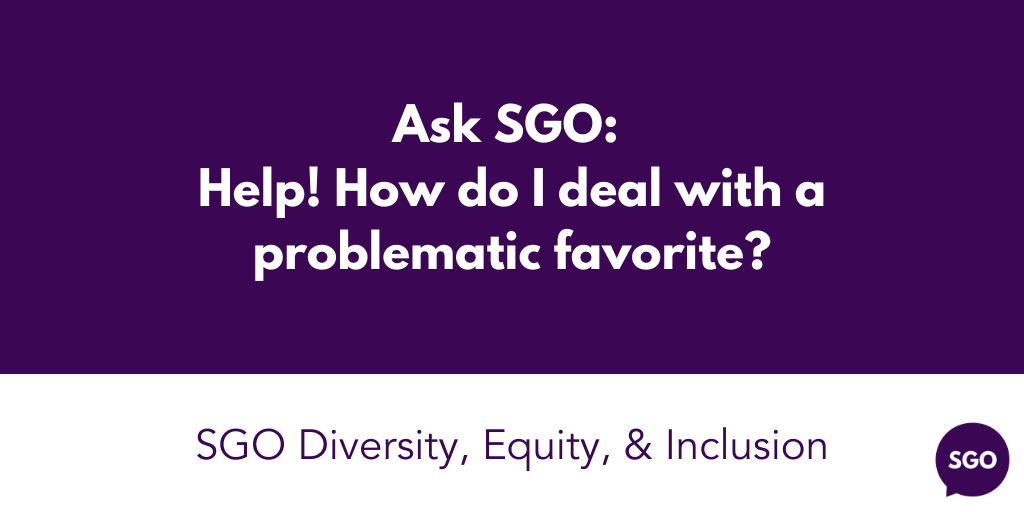 Felicia:
Okay, So you’ve just found out your fave, whether that is artist, filmmaker, celebrity, whoever it is, is super problematic, what do you do? Well, the answer is a little complicated, and I think it’s gonna be really personal for each person, but I’m happy to share a little bit about how I think about this, and we’d love to hear from you too, so definitely make sure to engage with us and tell us what you think.

But you know, I definitely have stopped listening to certain artists- singers, for example- where they were super problematic. So for example, I used to love Justin Timberlake a ton, and then just the more I heard from him as a celebrity and the more I really sort of understood how he was interacting and affecting other people in his life, namely people like Janet Jackson or Britney Spears, and really sort of critically was looking at how society was treating the women around him, versus treating him, I kind of had to say to myself, I think I’m not going to beat myself up over loving his songs earlier, but I’m not necessarily going to go and support him by buying the latest album that he’s putting out. That’s just one really quick example. And of course, there’s probably a lot of other ways to think about who out there is problematic and what kind of engagement do you have with them, but I would love to hear from you, what do you think?

Fatima:
Thanks so much Felicia, for sharing that and just creating the space to be honest about what that means. It’s so funny, well, not as funny, but kind of. About three years ago, I think, there was an article that came up that was like, let’s stop using the term problematic as much as we do, because sometimes it doesn’t allow for people to have those nuanced conversations. And I think it’s interesting because we are in a time where we use terms like “woke” or “cancel culture”, and there’s feels on various ends about if we’re doing it right, if we shouldn’t do it at all. Some of the things that I’ve been thinking about my personal role is realizing that doing problematic things isn’t necessarily just commentary on one siloed incident. Very often it’s commentary around what’s happening in our society.

I think that’s why a lot of times there might be visceral reactions, because when someone does or says something and they’re a celebrity, or they’re in a platform where all eyes are on them, we are more able to release judgment. The truth is these things happen in our communities, in the workplace, and so forth. So I think one thing that I’ve come to realize, or at least help me understand, is one giving grace. And giving grace, even if I choose not to listen to someone, but really thinking about, okay, this is something that I enjoy. Has this person named their mistakes? Are they actively working to make a difference? And sometimes we might not give that grace because it might hit so close to home, or we can see how this one incident is an example of so many systems of oppression that it hurts so much that we close that door and those ends are very valid.

I’ve been thinking about grace and saying, if there are other options out there, can I, can I use those things? If it’s like a social platform or website where I order something from, and I’m like, they’re problematic and they’re killing people, or they’re contributing to the death of people, then I’m like, okay, if I have the opportunity or privilege to listen to something else, support something else, then I’m more willing to go towards that route. I think sometimes we don’t realize that sometimes people, especially as it relates to companies and organizations, sometimes people aren’t in a privileged position to say, Hey, I’m going to buy everything green, for example, or I’m going to be vegan, for example, or I’m not going to do other things, because they might not have that privilege.

And so I think this question expands beyond just celebrities, but also some of the companies and organizations that we might support, and thinking about how can I just move away from this and/or, you know, put something else in that place that I’m still able to have fun, I can still listen to this type of music. There are other celebrities and I won’t die if I don’t listen or support a certain person or a company.

So that’s sort of where I’ve been around understanding these scenarios and then learning from myself, because I know I’ve said things and if someone was to pull up something from what I said in high school and throw it out and be like, Hey, Fatima’s a really horrible person. I would at least want an opportunity to apologize, name my mistakes and move forward from that.

Are you ready to find out more about how to deal with Diversity, Equity, and Inclusion issues as they show up in your life and workplace? Learn about our online course, Unconscious Bias in the Workplace.